What if Kurt Vonnegut had made a satirical business-simulation game?

This summer I created several games. One is a Flash game. A few of them simply use Javascript for interactivity. One of them, Rookie Recording, is in a new format for me... it is a Twine game.

Twine is an open source (GPL) program that uses wiki formatting to create hypertext. Often people refer to Twine creations as "interactive fiction" or "choose your own adventure stories", but I'm just going to refer to them as games. 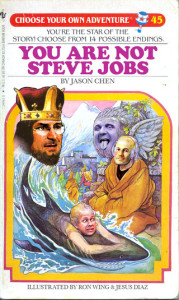 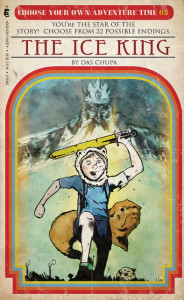 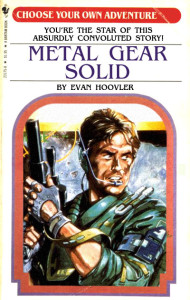 The Twine program is available (for free) for Windows, Mac OS X, and there is even "twee" a command-line version that uses Python. A game is organized in a nice graphical interface that shows connections between passages and points out any broken links. Once finished, the program generates a single HTML page which contains the entire game. 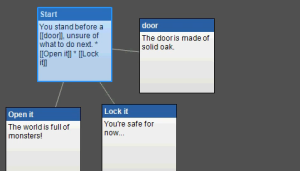 The program allows you to create a game without needing to know HTML, CSS, Javascript, et al. Games can be enhanced by more advanced coding, but the fact that such knowledge is unnecessary leads to a more egalitarian approach to game design. What if the "game of the year" wasn't developed by a giant corporation that invested years in a focus-grouped, product placement-ridden, arms dealer licensed, Michael Bay-esque machismo inflation device? 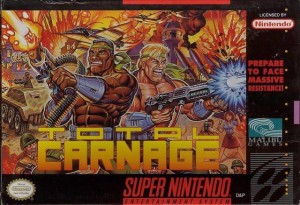 ULTRA BUSINESS TYCOON III by Porpentine - What if Kurt Vonnegut had made a satirical business-simulation game?

Brooklyn Trash King by Ben Esposito - A game about raccoons, rotting meat, and how far some ppl are willing to go to fund their Kickstarter

Calories by Emma Fearon - The most disturbing, horrifying Twine game that I've played so far