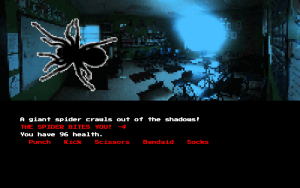 In May of 2014, I finished my second Twine game, Sundown. In the game, you explore an abandoned school. It's dark and everyone is missing. You can collect weapons, keys, and other items. The school is infested with giant spiders and every once in a while there are small earthquakes.

By exploring the school, you can find the answers... Where is everyone? What's up with these giant spiders? Why are we having these earthquakes? Why is there a mysterious tunnel under the school? With the right combination of skill and luck, maybe you will get to be the Student of the Month!

Go to ohiofi.com/sundown to play 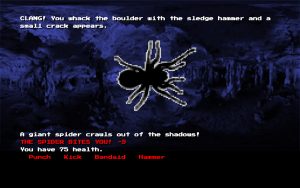 Programmed in Twine version 1, Sundown was the first game in which I used three new (new to me) features: screen shake effect, synced looping background music, and high scores. The screen shake effect that I used was created by Darius Kazemi. I slightly edited the code, which can be found here. I've also posted the code that I used to create the background music here.